Congratulations to the Newcastle Team led by Chris Strong. The team is being recognised by the Duke of Edinburgh award scheme as part of their 60th anniversary celebrations and an invite to Buckingham Palace has been received to take part in a garden party and receive a special commemorative plaque. Superb, award winning work!

The first expedition from the Sunderland team occurred last month led by Martin Gray. Again it featured a highly diverse mix of learners who coped fantastically with the challenge. A superb example of outstanding provision for learners.   This breath taking photograph is of a lesson being conducted at Sycamore Gap.

This is Martin preparing the troops at the outdoor classroom he has constructed. Awesome! 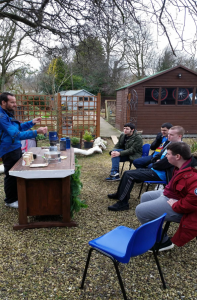